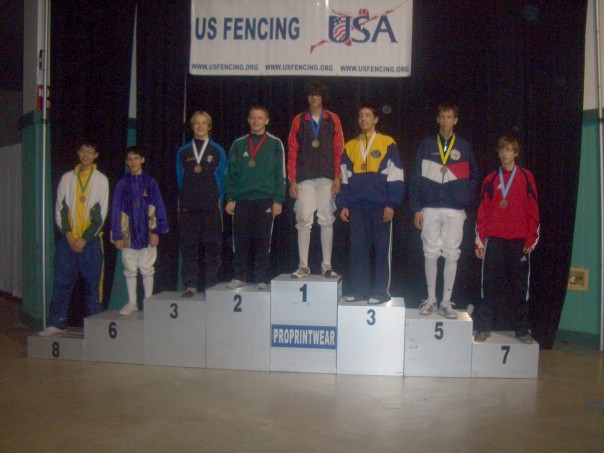 The Junior Olympics is one of the most competitive and largest events in the nation. Space City Fencing fielded a crew of 18 fencers, all representing the club admirably.

Caldet Men’s Foil – Silver Medal
Benjamin Parkins took the silver medal, solidifying his position on the US World Cadet Team. Ben will be representing the club and the US by competing in Korea next April.

Mike El-Saleh had strong start with 6 victors but he had a poor draw in DEs and lost a hard fought bout with the eventual bronze medal winner.

Mike Dudey, (only twelve) had an excellent showing making it out of the first round cut with two victories.

Cadet Women’s Foil
In a tough field, Elizabeth Rhodes did well winning six bouts in pools. She went on to capture points with a top 32 finish.

Junior Women’s Foil
Once again young Elizabeth Rhodes fenced well in pools going 3-3 . She went on to a top 64 finish before loosing narrowly 14-15.

Junior Men’s Epee
We fielded 4 fencers: Patrick Gremillion, Nick Negron, Ben McDonald and Greg Micek. All very young for this event (14 to15) even so they fenced very well all winning 2 DEs and getting into the round of the 64.

Cadet Women’s Epee
Our team, consisting of Neely Brandfield-Harvey, Elizabeth Donnenberg and Rebecca Rea, though young, are no strangers to the Cadet age group. All advanced through their first DEs, Elizabeth lost her second in very close bout. Teammates Neely and Rebecca had to fence each other in the round of the 32 – in a close bout Rebecca won and advanced on to the finals eventually taking 5th.

We would like to congratulate Neely on making the US World Cadet Team. Rebecca Rea came within a few points to joining her as one of three women cadet fencers chosen to represent the US.

Junior Women’s Epee – Bronze Medal
In this event Rebecca Rea, Neely Brandfield-Harvey, and Emma Buckingham all did well in the first round and moved on to DEs. Eventually Rebecca went all the way to the medal round – taking the Bronze and earning her “A.” Great job!

Special congratulations to our US Cadet World Team members: Ben and Neely, good luck at the World Championships next April!