Congratulations to all our 2006 youth fencers at the recent Colorado Springs Super Youth Circuit! 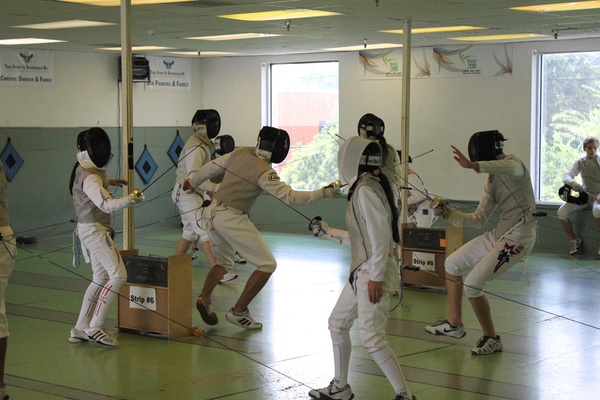 Just around the corner from the Olympic Training Center and the Air Force Academy, the whole team couldn’t wait to get started with things. Saturday night the team spent the evening in the party room at the Melting Pot where the kids cooked their own food fondue style, and parents relaxed and socialized over some good wine. Special thanks to Rose Filteau for organizing the team dinner.

Thomas Dudey triumphantly brought home a silver medal in Y10 men’s foil event. He, along with Sarah Followill (who also won a silver in the Y12 women’s foil event) were our top stars this tournament.

In Y12 men’s saber David Filteau and Joe Patterson, both new to the age bracket, fenced very well. David went all the way to top 8 before Will Spear, the number 1 Y12 US saberist (and the eventual winner) knocked him out in a hard fought bout – earning David a 7th place medal.

Michael Dudey, Andy Hirschfeld, and Ira Schlosberg had their work cut out for them in the events largest competition – Y14 men’s foil. All fenced very well, especially Ira who had a great run in pools and narrowly lost an exhausting DE with another talented fencer.

Nick Chao, David Filteau, Joe Patterson, Carl Hawley, and Travis Overton all competed in the second largest event: Y14 men’s saber. Both Nick Chao and Carl missed making national points by only three touches. In pools Joe stepped up his fencing and managed to upset one of the best Y14 fencers at the event.

PARENTS: Don’t forget to send your tournament pictures to [email protected] so we can include them in our newsletter and webpage! Thanks!