One of the most difficult concepts to visualize in foil and sabre fencing is the rule of right-of-way. This rule was established to eliminate apparently simultaneous attacks by two fencers.

In essence, right-of-way is the differentiation of offense and defense, made by the referee. The difference is important only when both the red and green lights go on at the same time in foil and sabre. When this happens, the winner of the point is the one who the referee determined was on offense at the time the lights went on. 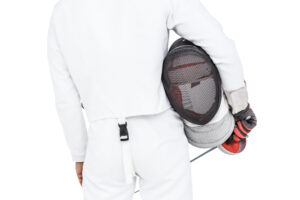 Épée does not use the right-of-way in keeping with its dueling origin – he who first gains the touch earns the point. Or, if both fencers hit within 1/25th of a second of each other, both earn a point. However, it is equally important to have a sound defense for épée, since the entire body must be protected from a touch.

For those new to fencing, it is difficult to follow the lightning speed of the fencers’ actions and swords as they move so quickly. To become more comfortable in watching a fencing bout, focus on one fencer. The fencer being attacked defends himself by use of a parry, a motion used to deflect the opponent’s blade, after which the defender can make a riposte, an answering attack.

Thus, the two adversaries keep changing between offense and defense. Whenever a hit is made, the referee will stop the bout, describe the actions, and decide whether or not to award a touch. It can take a while to learn the fencing moves as a watcher.

Fencers seek to maintain a safe distance from each other, that is, out of range of the other’s attack. Then, one will try to break this distance to gain the advantage of an attack. At times, a fencer will make a false attack to gauge the types of reactions by the opponent that can be deceived in the real attack.