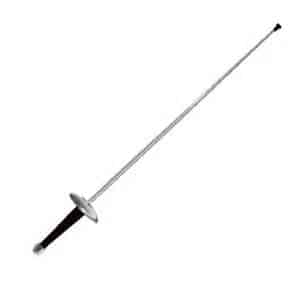 The foil has a flexible rectangular blade, approximately 35 inches in length, weighing less than one pound. Points are scored with the tip of the blade and must land within the torso of the body.

The valid target area in foil is the torso, from the shoulders to the groin, front and back. It does not include the arms, neck, head and legs. The foil fencer’s uniform includes a metallic vest (called a lamé) which covers the valid target area, so that a valid touch will register on the scoring machine. A small, spring-loaded tip is attached to the point of the foil and is connected to a wire inside the blade. The fencer wears a body cord inside his uniform which connects the foil to a reel wire, connected to the scoring machine.

There are two scoring lights on the machine. One shows a green light when a fencer is hit, and one shows a red light when her opponent is hit. A touch landing outside the valid target area (that which is not covered by the lamé) is indicated by a white light. These “off target” hits do not count in the scoring, but they do stop the fencing action temporarily.